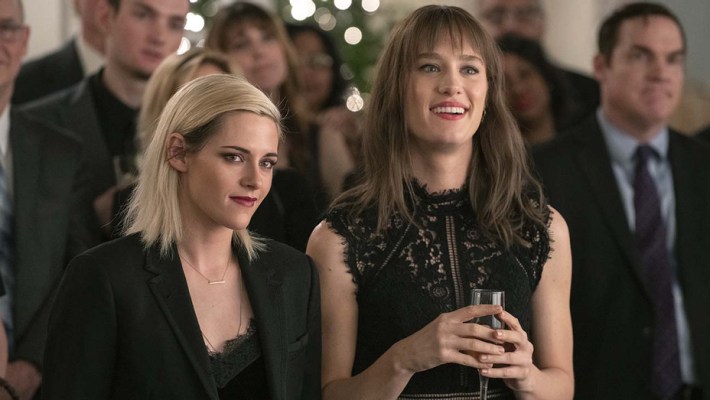 “Happiest Season,” a new film on Hulu, feels like a traditional, Christmas-themed romantic comedy — with one important exception.

The movie stars Kristen Stewart and Mackenzie Davis as Abby and Harper, a lesbian couple who are visiting Harper’s parents for the holidays. As they drive back to Harper’s childhood home, she makes a big confession: Despite what she’s told Abby previous, she never actually came out to her parents, which means Abby has to spend five days simultaneously ingratiating herself with Harper’s family while hiding the true nature of their relationship.

As we discuss on the latest episode of the Original Content podcast, “Happiest Season” can feel predictable or even formulaic at times. But in some ways, that’s what makes it so worthwhile — it demonstrates how a broad, crowd-pleasing comedy can just happen to star queer characters.

Despite the frequent laugh-out-loud moments, the movie also feels surprisingly honest in its depiction of how hurtful Harper’s secrecy can be,  and it enters surprisingly painful and emotional territory as it approaches the end.

In addition to reviewing “Happiest Season,” we also name our favorite Christmas movies and discuss the news that that Warner Bros. will release its entire 2021 slate (including “Dune” and “The Matrix 4”) on HBO Max at the same time that the movies are released in theaters.

You can listen to our review in the player below, subscribe using Apple Podcasts or find us in your podcast player of choice. If you like the show, please let us know by leaving a review on Apple. You can also follow us on Twitter or send us feedback directly. (Or suggest shows and movies for us to review!)